Evil Twin seems to love brewing beer with a twist, their three beer Yin and Yang series is a perfect example of the black and tan with a new age twist. But I’m not here to discuss their previous series let’s take a look at the latest two beer series starring Retro IPA and Modern IPA.

Pretty low risk style to pick to do a series with, as IPAs are the current market monster and every brewer pretty much has to have something hoppy on offer, but I like what Evil Twin has done with these. They are great beers to have side by side to compare and contrast how 10 years of market popularity has shaped the India Pale Ale. 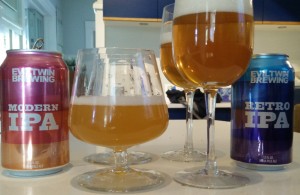 Retro IPA tastes pretty close to what I remember the west coast IPAs tasted like around 2005 even maybe a little “dogfish head 60 minute” type profile. Retro is balanced toward malt flavours with the hops being not only more timid but also less tropical and more grassy and earthy. Lots of great malt notes, mainly biscuit and some caramel, balance out a gentle, steady and non-dynamic hop wave. From a clarity standpoint this beer is absolutely clean and clear no chunks, resin or sediment of any kind. This beer would be a perfect IPA to give to someone who currently prefers more malt forward beer styles such as brown ales or even scotch ales as its timid hop character still adds a decent change up to a maltier style of beer. 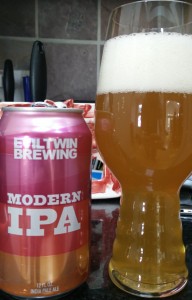 Modern IPAs profile is something I have come to absolutely treasure in almost any form. When fresh modern and experimental hops are on the bill, I am in. Galaxy, Mosaic, Citra, Simcoe, Nelson and a plethora experimental hops from growing regions around the world, are the new stars of these modern IPAs. Brewed most frequently, and successfully, in the north east of the USA these hazy and aromatic brews really bring the goods, especially in the aroma department, and the Evil Twin offering is quite a decent example. Even just opening the can is an experience; expect waves of hop character on the nose and palate with a nice resinous and lingering bitterness on the finish. Innocuous malt character but enough to offer some sweetness to cut the hops, and that’s it.

Another point about the pair; these beers come in 4-packs of cans the way the good lord intended as they are not meant to be aged in any way. The finest purveyors of beer may have even pre-packaged the pair in a mixed pack just for you, the consumer, so go forth and imbibe!

Hello beer lovers, I’m back! During the holidays I went home to Whitehorse, Yukon. Home to snow, ice, -30C temperatures, more snow and the now famous Yukon Brewing(Oh my god their imperial red! amiright?!). One of my childhood best friends is now head brewer at Yukon Brewing and it was a great pleasure to have an opportunity to sit down with him and have a chat about his career, brewing, beer and life in general.

Rob and I lived on the same street growing up. The house he lived in had a strange connection to me as several other friends of the family had lived there. When Rob’s family moved in he was the first person I didn’t know that had lived there. We were right around the same age(within days literally) and of course, as children do, we became great friends. Shortly after high school we lost touch but met up randomly once in a while over the years. When we got together one evening in early January it was the first time we had spoken in 13 years.

I am certainly biased but Rob is one of the most easy going, modest and approachable men I have met as I’m sure many beer drinkers would agree. He began his career working the gift shop at Yukon Brewing sometime in the late 90s early 00s he worked his way from the front to the back helping out on the bottling line and eventually working as a brewer for Yukon Brewing during its start-up days. Around 2003 he moved to Victoria, Vancouver Island and was eventually hired as head brewer at Spinnakers one of the original and oldest brew pubs of post prohibition North America, built in 1984. He brewed a large variety of fresh beer on a small brew system there and really got put in the hot seat experience wise. He managed to bring a revival to the slowly fading Spinnakers and his work there even garnered an atta-boy from John Mitchel himself(the grandfather of BC Craft Beer). Working along side the modern heroes of BC Craft Brewing(Sean Hoyne, John Meyer, Kevin Hearsum, Matt from Phillips etc.) Rob brewed up some of the best beer Spinnakers has offered. With a lot of freedom in the brew house Rob brewed and cellared a ton of unique beer focused on freshness and  balance, even some unique adjuncts. Rob eventually decided he was interested in returning to the Yukon and took an offer at Yukon Brewing.

Yukon Brewing has always provided a quality product(Lead Dog is my favorite of their regular brews) but in my mind they are a little timid. Rob explained to me that there is a certain art to brewing with balance and to make recipes work on a more modest profile is more challenging that just dry hopping everything. That said Yukon Brewing’s more recent offerings are starting to scratch the itch on my bruised palate. Their Megalomaniax Imperial Red is one of the better beers I’ve had and during the spring their Double Trouble Imperial IPA is a delight not to be missed. They had a lot of interesting brews on tap at their growler station this holiday season including a kolsch with black currants, a milk stout and every Friday at noon the brewers tap a cask of some variety from the crazed minds of the brewers. Now partnering with some of the local beer parlours up north Yukon Brewing is also offering cask ale nights. Really inspired Pacific North West ideas I’m sure Rob helped encourage.

As we shared a few brews Rob brought out a dusty bottle from his fridge, I knew what it was right away, ’39 1/2 Foot Pole’ the beer he created exclusively for the CRAFT Advent Calendar that we beer lovers gobbled up in 2013. I really enjoyed that beer and it was great to get Rob’s thoughts on the process behind brewing 39 1/2 Foot Pole. First challenge he had to meet was brewing a beer that was going to be consumed 7 months from its brew date. Yukon Brewing had recently come across some black currant concentrate and he decided to exemplify those fruity flavours with loads of the most fruity profile hops he could source from his supplier; hoping for the hops to bring the blackcurrants to the forefront. What started out as the most hoppy beer Yukon Brewing has ever brewed mellowed into a fruity, boozy imperial ale that I found actually quiet delicious. Rob described the initial taste of 39 1/2 Foot Pole as a very hop forward IIPA with a slight fruit tang, I must admit I was quiet jealous as I would have loved to taste that beer but also was impressed with the foresight that it took to brew.

I asked Rob about what it is like to be a master brewer and he was quick to correct me that he is a head brewer(that modesty!). In the world of brewing master brewers have acquired a minimum education of at least a 3 or 4 year degree and often beyond as there are several universities that offer a masters degree in brewing. Rob brews based on experience alone and describes it as more akin to the work of a chef than anything else, despite the often rock star like attention in the Pacific North West. He works to a recipe and tweaks based on what style he’s brewing. The regular brews are hard and fast to the recipe to not disappoint the thirsty masses and the seasonal brews are the more exciting ones. Rob also does a fair amount of cellaring now in firkins when pulling a beer from primary and cellaring it a brewer gets to really innovate and work on their cellarmanship; I’ve heard rumours of the wonderful porter Yukon casked recently and I was sad to have missed it.

When I asked Rob what his favorite brewer or beer was he first said that he could never pick one but eventually confessed that Lagunitas Sucks IIPA was likely his favorite, if he was forced to choose just one; I tend to agree.

It was really great to reconnect with Rob and I was super excited to get his thoughts on brewing in the north and I would like to thank him for his time, and beer, as it really meant a lot to me to connect with an old friend.

Cheers! From the WCBL.