Stone Brewing, out of San Diego County, California, is famous for its IPAs; really most Californian Brewers make at least one killer IPA, it’s what they do down there. Today I’d like to talk about a very specific IPA, well Imperial IPA that is, Stone ‘Enjoy By’. 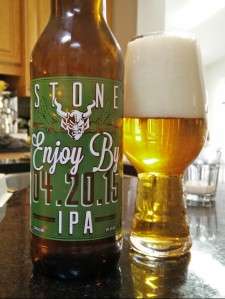 I still don’t get the significance of this date.

This brew is quite well respected in the craft community and I think most people who enjoy strong, bitter beer would agree. To me what makes the ‘Enjoy by’ series so interesting isn’t that it’s a great beer but what it does beyond that. IPA, IIPA, APA and any other hoppy styles are brewed to be drank within a certain time period as the alpha acids, that provide aroma and bitterness in hops, degrade with exposure to light and oxygen so as a beer sits it slowly loses its hoppyness. With a few months of aging that nice, bright, citric and bitter IPA will mellow into a gentle ale or maybe even barley-wine like profile depending on any residual sugar or higher ABV.

Now what Stone Brewing does with the labeling and recipe changes to ‘Enjoy by’ is what brings this point to light. The big green label on the bottle is a massive, ‘in your face’, message relating to this point. Drink this beer while it’s fresh. ‘Enjoy’ it by this date. Now most people would think, what’s the big deal? Well the big deal is that most brewers are frightened to even put a small expiry date/born on date on their packaging where Stone has the balls to make it the entire purpose of the brew. That tends to put a lot of pressure both on Stone Brewing and its distributors and trusted retailers to deliver the beer well before the date on the bottle and packaging, like a constant reminder of the inevitable expiry. Just ask any purveyor of fine ales about what a shelf turd is, as ‘Enjoy By’ becomes the best example after the date has passed.

Stone also does a great job of mixing up the recipe and it’s a really great way to note differences in what is labeled as the same beer in the same style. I recall 08.16.14 tasted kinda catty as the addition of Simcoe hops often is. 12.26.14 was almost like Five Alive juice, as one of my friends so accurately noted. 02.14.15 was more balanced and drinkable, smoother. 04.20.15 had some pretty onion like, grassy notes but still quite citric. These batch to batch variations can make the drinker more aware of what is in her more regularly available beer and can draw attention to freshness and consistency and get the drinker thinking more about the quality of their favorite brews, the entire reason why we drink craft beer!